Since S-Docs is a Native Force.com app, it integrates seamlessly with Salesforce Chatter.  Enabling Chatter on S-Docs will allow users to comment (Chatter) on specific S-Docs, and notify any user ‘following’ an S-Doc of changes. For general information on how to configure Chatter, please start with this Salesforce tutorial. 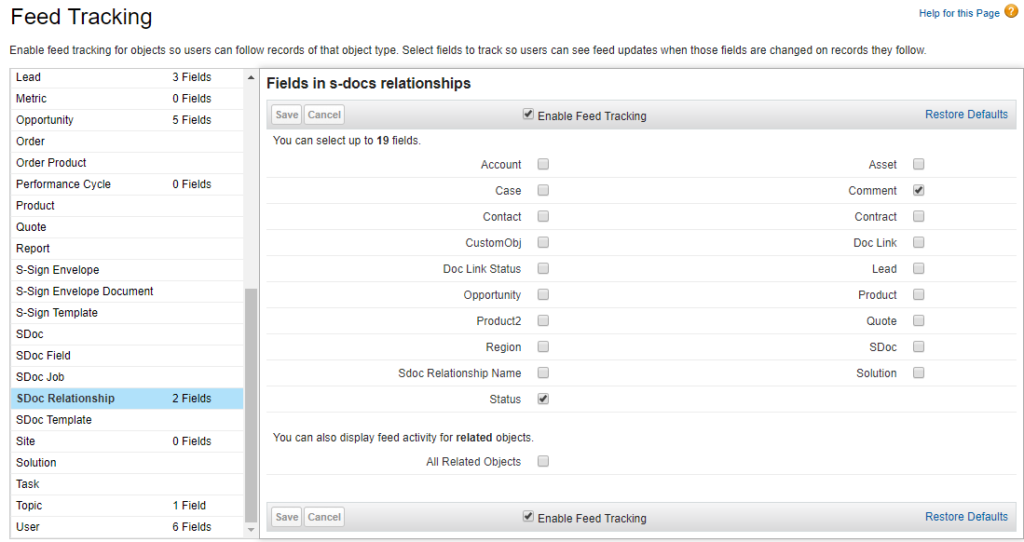 Then, check Enable Feed Tracking to be able to select fields to track. Typically, customers will want to track just the “Status” and “Comment” fields, as these are the fields that are most meaningful to track. If you integrate S-Docs with an electronic signature solution like S-Sign, users could be notified via the Chatter feed that documents have been executed by the customer.

Now that you have Chatter enabled and Feed Tracking set, you will need to make one additional change. You will need to create a hyperlink on the S-Docs related list that can take the user to the S-Docs Relationship record detail page. This is the only page where users can click on the Follow button located on the Chatter toolbar.

While you might first consider using the Relationship ID field as an easier approach, this ID value would display the S-Doc Relationship ID, not the S-Doc ID, which again may confuse users. A formula field rendered as a hyperlink is the best solution. Since each org will have its own preference on how this related list column should appear, we have not included this formula field in the core S-Docs package, but rather leave it up to the Salesforce Admins to implement.

You will need to create this hyperlink using a custom formula field on the SDOC_Relationship__c object. You will then add this field to the related list view.

By using the formula below, you could include a new column that replaces “Document Number” with the same value but is a hyperlink to the S-Doc Relationship record. (For comparison only, both columns are included in the related list shown below.)

The table below describes the intended behavior we are seeking:

The example below uses an alternative link. The following formula will create a “Set Chatter Prefs” link field that you then add to the related list layout.

Once you’ve added the link to the relationship object, the user simple opens the record and then clicks on the follow icon.